Ali was born in California, but when he was young, he and his family moved to Morocco. He grew up there and then, at the age of 19, decided to move back to the United States. This wasn’t a simple move for Ali. He spoke almost no English, and the only person he knew in the country was his uncle. But Ali was determined to build a better life for himself.

Upon arriving in Wisconsin, where his uncle lived, Ali worked a series of jobs in hardware stores, gas stations, and restaurants. In fact, he lived with a group of his coworkers from Culver’s, a Wisconsin-based fast-food chain, for a couple of years.

“When I arrived in America, I spoke Arabic, French, and some Spanish,” he says. “But living with Americans really helped me pick up English. I became fluent in only a few years.” 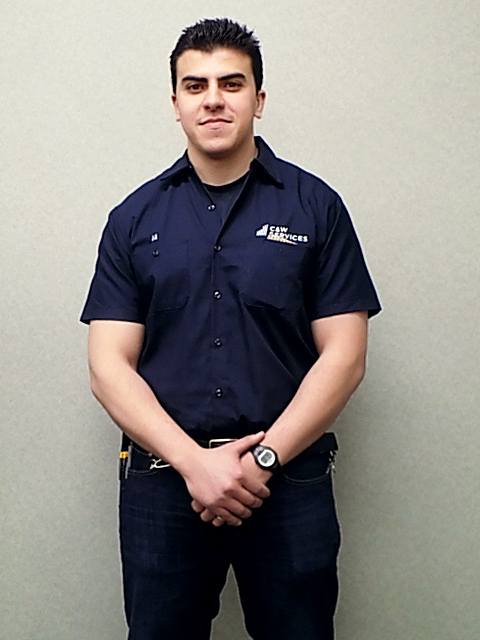 Ali always liked working with his hands, and he eventually found a job as a mechanic at a local Ford dealership. However, he still felt like he had more to achieve. So, at the recommendation of a friend who was a mechanic in the Air Force National Guard, Ali decided to enlist.

In the Air Force National Guard, Ali trained as a firefighter and first-responder. Some of his duties included operating and maintaining firetrucks and putting out fires.

“For the National Guard, I work one weekend a month and complete other multi-week training deployments.”

Alongside his work with the National Guard, Ali also enrolled in an industrial maintenance course at Madison Area Technical College. It was during his first semester that Ali connected with C&W Services. “Two employees from C&W Services CUNA Mutual Group account came and gave a talk about the C&W Services Apprenticeship Program,” he says. “They explained how you work at a client site, getting hands-on training, and how you also get tuition assistance to attend school. It sounded like a great opportunity. I applied right away.”

Ali became an official member of our apprenticeship program in January 2019. He’s working as an HVAC technician at CUNA Mutual’s large campus that, pending final approval, will be undergoing a huge improvement project. For Ali, the experience has been exhilarating. “It falls to me and my team to keep the site’s HVAC running for day-to-day operations, and we will be counted on while the future construction is going on,” he says. “It’s been a great experience so far.”

Looking ahead to the future, Ali is excited about his career in facilities. It’s the type of advanced technical work he hoped to find in America. “So many of the people I work with are very knowledgeable, and I want to be just like them. I want to become great in this field. I want this to be a good career.”

Ali is one of many stories we have from the field that demonstrate how our team’s culture is the backbone of our service delivery success. We pride ourselves on delivering a broad portfolio of services, developing and empowering our people, and defining a new status quo.

Get inspired and read more stories about employees just like Ali.