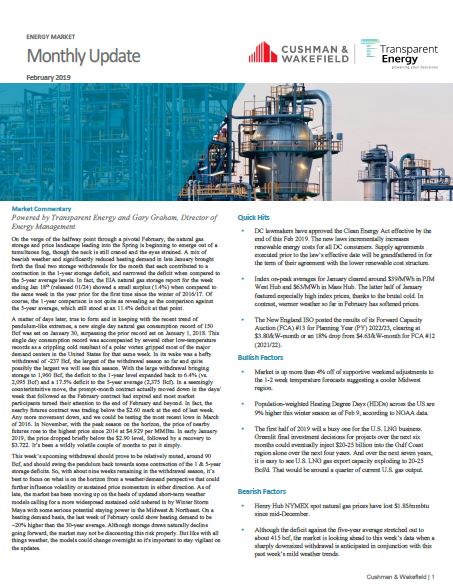 The top things you need to know about the February energy market.

A mix of bearish weather and significantly reduced heating demand in late January brought forth the final two storage withdrawals for the month that each contributed to a contraction in the 1-year storage deficit, and narrowed the deficit when compared to the 5-year average levels. In fact, the EIA natural gas storage report for the week ending Jan 18th (released 01/24) showed a small surplus (1.4%) when compared to the same week in the year prior for the first time since the winter of 2016/17. Of course, the 1-year comparison is not quite as revealing as the comparison against the 5-year average, which still stood at an 11.4% deficit at that point.

A matter of days later, true to form and in keeping with the recent trend of pendulum-like extremes, a new single-day natural gas consumption record of 150 Bcf was set on January 30, surpassing the prior record set on January 1, 2018.

This single-day consumption record was accompanied by several other low-temperature records as a crippling cold resultant of a polar vortex gripped most of the major demand centers in the United States for that same week. In its wake was a hefty withdrawal of -237 Bcf, the largest of the withdrawal season so far and quite possibly the largest we will see this season. With the large withdrawal bringing storage to 1,960 Bcf, the deficit to the 1-year level expanded back to 6.4% (vs. 2,095 Bcf) and a 17.5% deficit to the 5-year average (2,375 Bcf).

In a seemingly counter-intuitive move, the prompt-month contract actually moved down in the days/week that followed as the February contract had expired and most market participants turned their attention to the end of February and beyond. In fact, the nearby futures contract was trading below the $2.60 mark at the end of last week. Any more movement down, and we could be testing the most recent lows in March of 2016. In November, with the peak season on the horizon, the price of nearby futures rose to the highest price since 2014 at $4.929 per MMBtu. In early January 2019, the price dropped briefly below the $2.90 level, followed by a recovery to $3.722. It’s been a wildly volatile couple of months to put it simply.

To learn more about these developments and to get the latest prices, trends, data highlights, and temperature probabilities read the full energy update.