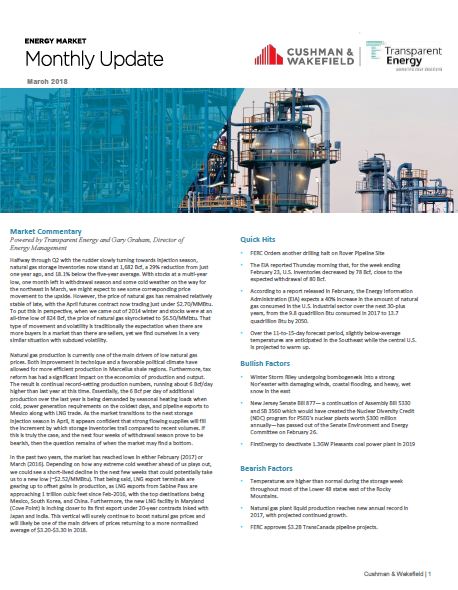 Cushman & Wakefield, in partnership with Premier Energy Auctions, have just released their Market Energy Update for March 2018. This issue provides an overview of the economic, geopolitical, and meteorological factors affecting the energy market.

Natural gas production is one of the main causes of low natural gas prices. Both improvement in technique and a favorable political climate have allowed for more efficient production in the Marcellus Shale regions. The result is continual record-setting production numbers, which are about 6 Bcf/day higher than at this time last year.

Additionally, the past two years, the market has reached lows in either February or March. Depending on how any future cold weather plays out, we could see a short-lived decline in the new few weeks that could potentially take us as low as ~$2.52/MMBtu. But with that said, LNG export terminals are gearing up to offset gains in production, as LNG exports from Sabine Pass are approaching 1 trillion cubic feet.