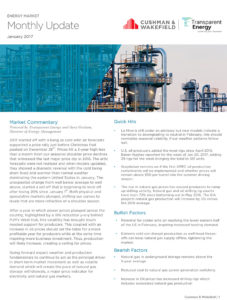 Catch up on January’s update.

2017 started off strong as cold artic air forecasts caused a price rally just before Christmas that peaked on Dec. 28. Prices saw a two-year high less than a month from seasonal shoulder prices declines that resulted in the last big price fall of 2016. These forecasts were not realized and shower a dramatic reversal due to short-lived cold temperatures and uncharacteristically warm weather across the east side of the U.S. this month.

This caused a selloff that is starting to slow down after losing 20 percent since the start of the year. Physical and speculative markets dramatically fell, leveling curves to what is more typical of a shoulder season.

After falling prices across the US in 2016 and a 19 percent reduction in Y-O-Y after PJM’s West HUM, much-needed support for producers has crept up. This along with a jump in oil prices should result in a strong year for producers and inspire higher levels of business investment. Production should increases, creating a ceiling for prices.

Weather and production fundaments will still serve as the main driver in short-term market movement and volatile demand, which will create the pace of natural gas storage withdrawals, a huge indicator for electricity and natural gas markets.

Gary Graham, director of energy management, can take you through the report and your options.

Read the full January Energy Update for a more throughout description of last month’s news.